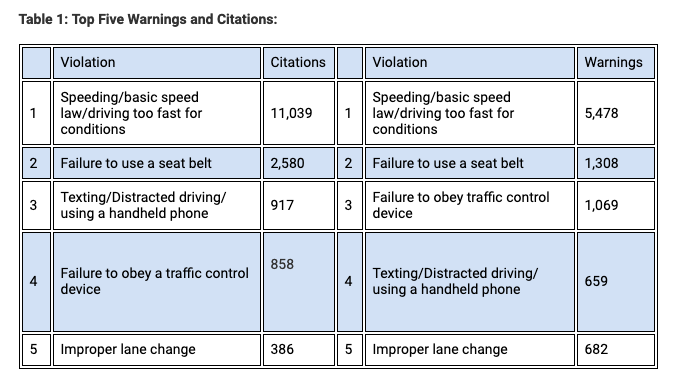 Speeding and not wearing a seat belt were the top violations for both passenger-vehicle drivers and commercial drivers during the Commercial Vehicle Safety Alliance’s Operation Safer Driver Week in July.

Law enforcement officers in Canada, Mexico and the U.S. stopped more than 46,000 drivers engaging in dangerous driving behaviors during the week of July 11-17, issuing 10,486 warnings and 16,863 citations. Officers pulled over 28,148 commercial motor vehicles and 17,910 passenger vehicles.

“Since we know that most crashes are caused by drivers, the best way to prevent crashes is to start with the cause – drivers,” said CVSA President Capt. John Broers with South Dakota Highway Patrol. “If seeing a patrol car causes a driver to slow down in a high-risk crash area of the roadway, then we’ll put patrol cars in that area. If being stopped by an officer causes that driver to be more conscientious, then our officers will pull over unsafe drivers. We will continue to do our part to make our roadways as safe as possible.”

FMCSA field staff completed 90 high-risk and 201 moderate-risk carrier investigations, resulting in 64 conditional ratings and 30 unsatisfactory ratings. Three driver notices of claim are planned, 21 carriers entered the denial of access process, 10 out-of-service orders were issued and one pattern of safety violations case is under review. Out of 291 investigations, nine resulted in enforcement for the violation of 392.2 – unsafe driving.