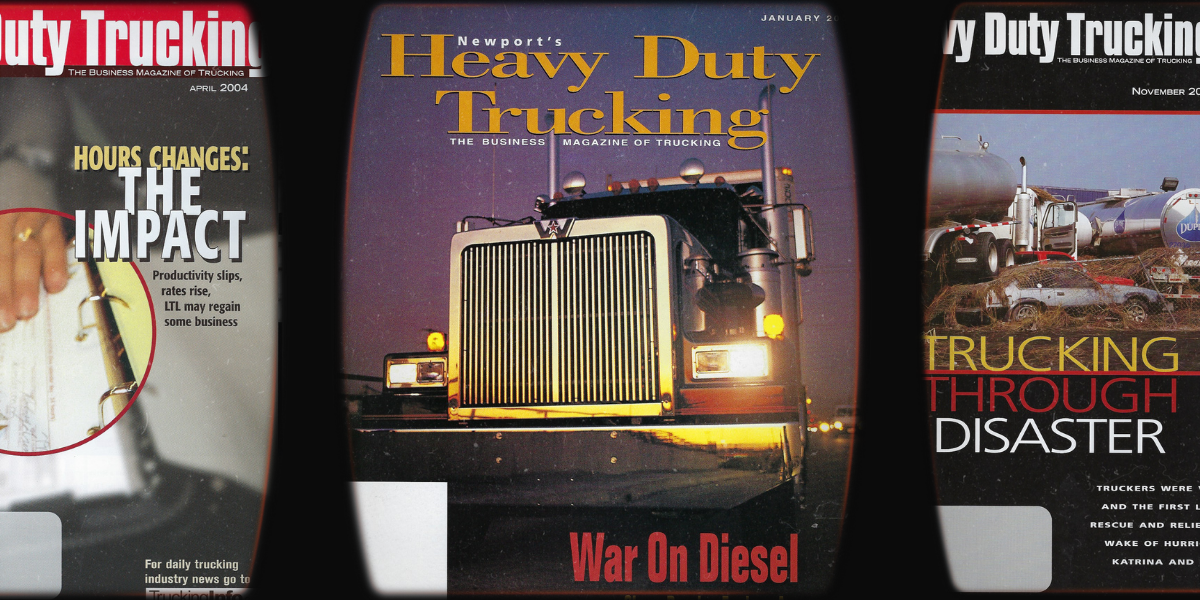 The first decade of the 21st century brought new challenges to trucking, including safety and emissions regulations, changing technology, volatile fuel costs and a rollercoaster economy.

The Federal Motor Carrier Safety Administration was officially born in January 2000, ushering in a decade of increasing safety regulations that would culminate in what we now know as the Compliance, Safety, Accountability program but then was called Comprehensive Safety Analysis (CSA) 2010.

Long-awaited reforms of truck driver hours-of-service rules were supposed to go into effect in 2004, but they were challenged in court, rewritten, and challenged again, in a cycle that lasted into the next decade.

The 2000s also were a decade of ever-tightening engine emissions regulations.

A January 2000 cover story, “War on Diesel,” reported on Environmental Protection Agency efforts to declare diesel exhaust a cancer threat. “The U.S. government is trying to declare a death sentence on the use of diesel-powered vehicles,” Glenn Keller, executive director of the Engine Manufacturers Association, told HDT.

Making matters worse, what had been a January 2004 emissions deadline for lower NOx and particulates was moved earlier, to October 2002, thanks to a 1998 settlement between engine makers and the EPA over allegations of cheating on emissions tests.

In January 2002, HDT reported that most engine makers would use cooled exhaust-gas recirculation (EGR) to meet the regulations. Caterpillar wouldn’t have its ACERT technology ready until a year past the deadline — and by the end of the decade, Cat decided to get out of the on-highway engine business.

As we neared the end of the 2000s, engine makers worked to finish the design and testing of engines to meet 2010 emissions. The industry saw wars of words and even lawsuits between the two technology camps — selective catalytic reduction vs. higher levels of advanced exhaust gas recirculation.

Heading into the 2010s, the focus was shifting away from tailpipe pollutants and toward greenhouse gas emissions to address climate change concerns. In 2009 HDT launched a department called “Clean & Green” devoted to trucking and the environment.

The November 2005 issue, “Trucking Through Disaster,” devoted 25 pages to team coverage of how the trucking industry was affected by, and responded to, Hurricanes Katrina and Rita.

In August 2006, “50 Years on the Interstate” was not only a historical perspective, but also explored the issue of how the country would pay for our infrastructure going forward.

Deborah Lockridge made her debut as editor in the April 2009 issue, having moved up from senior editor to senior managing editor since joining the company in 1998.

A series that ran for much of 2001 focused on “Coping with Crisis.”

“Spiking fuel costs, a driver shortage, severe winter weather, and a variety of economic factors — including a glut of used trucks impacting equipment trade cycles and fleet financials — have combined to make this first year of the new millennium one of the most challenging for fleet managers since deregulation of trucking in 1980,” HDT wrote.

Little did we know when we started that series what the industry and the country would face on Sept. 11 of that year. Our November cover story focused on the aftermath of the terrorist attacks. “Before, vehicles were means of conveyance. Now they are potential weapons of mass destruction.”

Increasing and volatile fuel costs would remain a challenge throughout the decade. By 2008, crude oil was over $100 a barrel and diesel prices spiked to an unheard-of $5 or more per gallon in some areas. HDT devoted its entire June 2008 issue to “Fuel Crisis Survival.” The issue would go on to win the Grand Neal award for business journalism from the American Business Media.

Fuel prices came back down by the end of that year — but only because the sluggish economy, hit by the housing crisis, fell into what would become the longest and deepest downturn in the U.S. economy during the post-war era. When the housing also bubble burst, it led not only to a recession but to a significant credit crunch. Rates were under enormous pressure, thanks to lower freight volumes and excess capacity. Making things worse were “zombie truckers” — carriers that were only still in business because banks didn’t want to repossess all those trucks.

This article first appeared in the July 2022 issue of Heavy Duty Trucking.